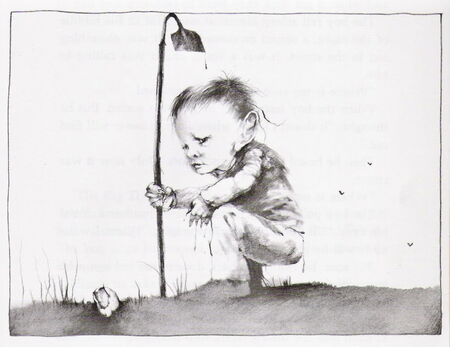 The Big Toe was the first story in Scary Stories to Tell in the Dark. It follows a child who finds a big toe in his garden. Plus it has another ending.

One day, a boy was digging in his garden, when he saw a big toe sticking out of the ground. He tried to pick it up, but it was stuck. It wouldn’t budge, so he pulled as hard as he could and it came off in his hand. Then he heard something groan and scamper away.

The boy took the big toe into the kitchen and showed it to his mom.

“That looks nice piece of meat,” she said. “I’ll put it in the soup, and we’ll have it for dinner.”

That night, at the dinner table, the boy’s father scooped the big toe out of the soup and chopped it up into three pieces. The father, the mother and the boy each ate a piece. Then they did the dishes, and when it got dark they went to bed.

The boy fell asleep almost at once. But in the middle of the night, he was rudely awakened by a strange sound. He listened closely. It sounded like there was a voice coming from outside his window and it was calling to him.

When the boy heard that, he got very scared. But he thought, “It doesn’t know where I am. It never will find me.”

Then he heard the voice once more. Only now it was closer.

The boy pulled the blankets over his head and closed his eyes. “I’ll go to sleep,” he thought. “When I wake up it will be gone.”

“Where is my toe?” the voice groaned.

The boy watched in horror as his bedroom door opened. Shaking with fear, he threw his bedclothes over his head and listened as the footsteps slowly moved through the dark towards his bed.

The boy hears the voice calling for its toe, he finds a strange looking creature up inside the chimney. The boy is so frightened he can’t move. He just stands there and stares at it.

Finally, he asks: “W-w-w-what you got such big eyes for?”

“W-w-w-what you got such big claws for?”

“W-w-w-what you got such sharp teeth for?”

“TO CHOMP YOUR BONES!

Retrieved from "https://scary-stories.fandom.com/wiki/The_Big_Toe?oldid=878"
Community content is available under CC-BY-SA unless otherwise noted.